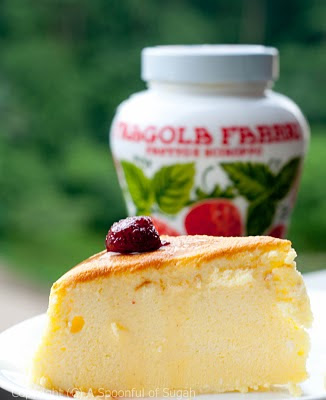 I followed a recipe from one of my favourite bloggers, Auntie Lily of the "Lily's 'Wai Sek Hong'", blog, who always makes me feel like I am receiving secret cooking tips and instructions from my late grandmother, who was also a great cook.

But anyway I digress. I've made this cake many many times, and have learnt that the key to achieving a light texture lies in beating the egg whites correctly. The water bath is also essential, so that the cake will have a beautiful, crack-free surface.

One of the important adjustments that I made to the basic recipe, was to add cream of tartar to the egg whites while they are being beaten. This is to ensure that you do not overbeat the egg whites, as once you do, your cheesecake will rise phenomenally in the oven only to suddenly shrink and contract at the last stage of baking to become a sunken and dense little cake.

Although this cheesecake looks similar, it is different in texture from the Japanese cheesecakes sold at the malls and supermarkets (like Miki Ojisan) which are drier and more like very soft chiffons. This souffle Japanese cheesecake (which is essentially a type of foam cake) is much more moist and tender. Properly baked, it should have a cottony soft and melt-in-your-mouth texture.

My 3 year old Sugababe loves to eat these plain, cramming it into her mouth in quick succession (they are so light!). I, on the other hand, like to have these with Fragola Frabbri strawberries (Italian, and the best!) and a generous spoonful of its shiny syrup drizzled on top. butter and plain flour (for buttering the mould, if not non-stick).

Method:
1. Melt A. over a pan of simmering water until the mixture liquefies (stir every 3 minutes), use spatula to stir the mixture well. Let cool to room temperature.

2. Mix B. until cornflour dissolves and pours into A, stir until well-combined. Add in beaten yolks and strain the mixture.

3. Preheat oven to 150°C/300°F. Line bottom of mould with baking parchment paper. Butter the sides of the mould and coat it with plain flour, remove excess flour. If using non-stick mould, you can skip this buttering and flouring step. If using loose bottomed cake tin, cover the outside of the tin with 2 layers of aluminium foil to ensure that water from the water bath does not seep in.

4. In a clean bowl (make sure it is completely free of oil and water), beat the egg whites till foamy and in 1/2 teaspoon cream of tartar. When soft peaks form, add in sugar and cornflour mixture slowly, one tablesppon at a time, and beat until stiff glossy peaks form.

6. Pour batter into cake tin. Sit the tin in a bigger mould or baking tray. Bake in a bain-marie (water-bath). Water must be boiling hot when poured into the baking tray or bigger mould. Water level should come up to ¾ of the height of the cake tin, at least half if you cannot manage ¾.

7. Put in oven and bake for about 25 minutes or when top is brown, reduce the heat to 125°C/260°F, continue to bake for another 1 hour or until a cake skewer comes out clean. (Mine took 1 hour 15 minutes). This cake doesn't dry easily, I would err on the side of a slightly longer rather than a shorter baking time. Let the cake cool in the cake tin and remove from tin when cooled and refrigerate (it’s ok to leave the cake in the tin and refrigerate).

Posted by Sugahmommy at 9:33 AM