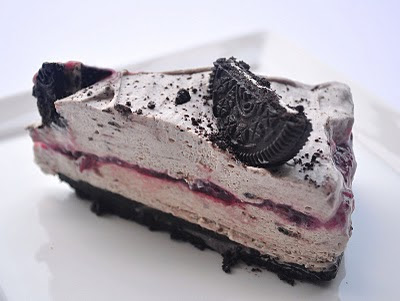 I had half a carton of whipping cream left in the fridge and a ton of cream cheese, and I didn't want too much trouble (I already spend waaaaay too much of my time baking, and besides, Michael Weston on Burn Notice was calling ...). So I decided to make a no-bake cheesecake. This has become my go-to lazy-ass dessert. In my world, cheesecakes fall into 3 broad categories - the fluffy Japanese-type cheesecake, the denser, baked (e.g. New York) cheesecake, and the no-bake, chilled cheesecake. My favourite is the New York cheesecake, but I have to admit that the sheer ease of making the no-bake variety is winning me over.

The cheesecake shown in the picture was a very soft and creamy cheesecake that needed to be kept in the freezer (the reason for this being that I varied the usual proportions by adding more whipped cream - I wanted to finish it remember?), but I include below my usual recipe, one that does not require freezing, but only to be chilled in the fridge. I am a fan of tall cakes, so the recipe uses quite a lot of cream cheese. If you are not inclined to buy so much cream cheese, you can half the recipe (of course your cake will look flatter) and perhaps use a smaller springform tin.

The wonders of a no-bake cheesecake is that you can easily vary the proportions of cream cheese to whipped cream depending on whether you prefer it firmer (more cream cheese) or softer (more whipped cream). Some recipes also call for gelatin to be added to produce a creamy and yet firm texture, but for the sake of simplicity I have kept the ingredient list below simple to make this a truly lazy-asssed recipe that will not require more than half an hour of your time (omitting chilling time). 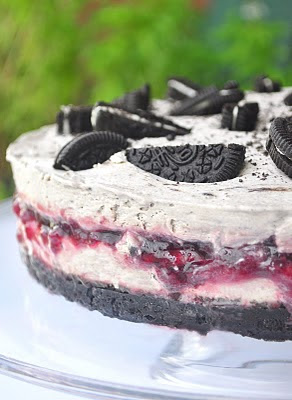 Method:
1. Pound Oreo biscuits until finely crushed (to crumbs). Mix 250g of the crushed Oreo biscuits with 150g of melted butter and spread evenly over the base of the springform pan. Chill in fridge until the base sets hard.

5. Decorate the top of the cake with Oreo biscuits, then chill in the fridge for several hours (preferably overnight) until the cake sets. 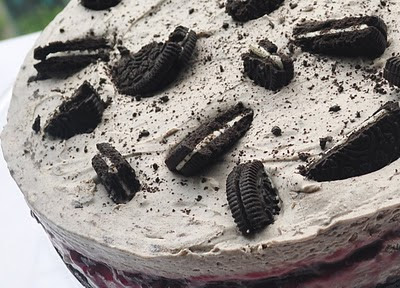 Posted by Sugahmommy at 5:52 AM