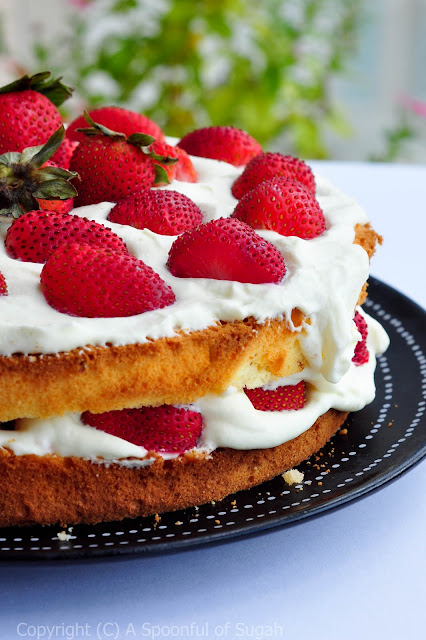 That was me for the past two days, wouldn't ya know; sleeping, waking and living in a strawberry shortcake baking nightmare.

I'm not a fan of sponge cakes. The only reason I even like strawberry shortcake is purely, PURELY, because since I was a child I identified it with Strawberry Shortcake, the cartoon and merchandising character. That's the power of TV for ya.

I love it that my daughter is just as nuts about Strawberry Shortcake, so after repeated requests from her, I finally got down to making one this week.

As you may know, there are many variations of the strawberry shortcake. The true American version, so I'm told, is not a cake at all, but a biscuit, kind of like a scone, which you split in half and fill with strawberries and whipped cream. Then there is the more common cake version, consisting of pound cake or sponge cake layers (usually soaked or brushed with syrup) sandwiching strawberries and fresh cream. Over here, the Japanese style of strawberry shortcake, consisting of very light sponge layers, is very popular.

My favourite kind of Strawberry Shortcake is ... the berry-scented, collectible rubber figurine kind (I think kids in the 80s were in serious danger of brain damage from sniffing those toys).
Unfortunately, since that is neither bakeable nor edible, I decided that a sponge sandwich version, with strawberries and fresh cream oozing out between layers, would be most reminiscent of Miss Strawberry Shortcake's poofy get-up. It was supposed to be an easy affair: I thought I could bake it in the morning, frost it at noon and have it in time for a late afternoon tea on Tuesday. And even have time after for my run.

How the best laid plans of mice and men go astray.

I followed a recipe on Okashi's cookbook for the genoise sponge, and noticed that it required butter to be added into the egg yolk mixture before flour was folded in. Usually, you are required to add in butter last. However, like the goon that I was, I thought she probably had a good reason for this discrepancy and that this was perhaps a super secret way to make the sponge incredibly fluffy ... and so I pressed ahead. Later, I found out that when you add butter first, it makes it hard to fold in the flour completely, resulting in the cake having little pockets of uncooked flour. I should also mention that I am not without fault in the first failed attempt - I had carelessly doubled the recipe to accomodate my bigger pan and as a result, the cake did not rise well. It ended up so tough and springy I could have bounced on it like a real foam cushion.

Then I chanced upon this post on Crumbb (by Teo Pau Lin, you may remember her as a former local news journalist) on the perfect sponge cake, and was encouraged to try again. The problem with me is that I can never leave a recipe well enough alone. Sometimes my meddling is a stroke of genius, but just as often I realise too late it is a sheer act of imbecility.

In this case, I substituted the plain flour with cake flour, added 2 tablespoons of hot water to the egg yolk mixture (it was supposed to whip to a greater volume this way), and (this probably being the reason for my failure) I scaled up the recipe (again) to accomodate my 9-inch pan. In the end the sponge baked up nice and fluffy along all the circumference but was noticeable denser in the middle. I think it would have baked fine in a chiffon tube pan with its hollow column, but somehow the scaled up recipe didn't allow for it to cook through and rise nicely in the middle. It wasn't bad enough to be chucked, so in the end I decided to go ahead and frost it anyway. I brushed the layers with italian strawberry syrup and Limoncello, whipped up some vanilla cream and folded in some fresh strawberries. After the cake was chilled in the fridge and the flavours had time to work themselves into the spongy layers, the cake actually tasted pretty good, even though I wasn't happy with the texture.

The problem with baking is that when it turns out perfectly, you don't have enough to go around. And when it doesn't, you have to eat it all up yourself (at least if you are a perfectionist like me). And that's where I have to be thankful that it was, after all, a strawberry shortcake, because wouldn't ya know, my little Sugababes would eat practically ANYTHING that has something to do with Miss Strawberry Shortcake. Although that doesn't explain why my husband is eating it... 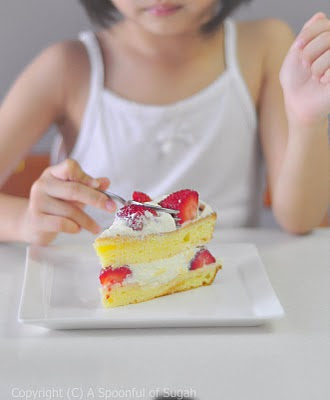 Posted by Sugahmommy at 9:03 AM

Subscribe to A Spoonful of Sugah by Email
Labels: sponge, strawberry shortcake