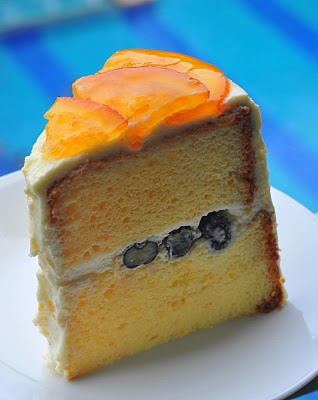 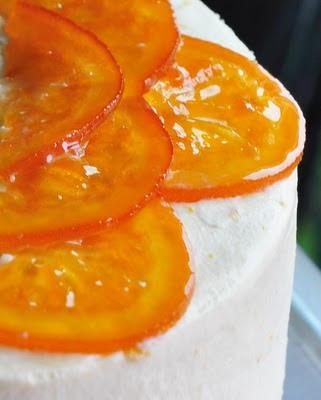 I was glad for the last minute decision to add blueberries between the layers, as it paired wonderfully with the orange flavour and prevented the cake from being a one-note orange confection.

Posted by Sugahmommy at 7:24 PM 0 comments

Subscribe to A Spoonful of Sugah by Email
Labels: chiffon, orange 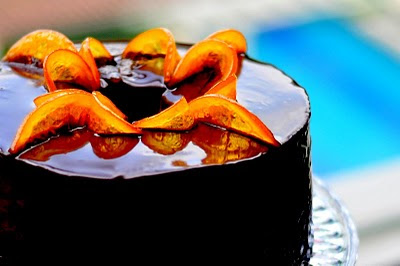 ****************************************************
Oranges and lemons. I guess it is unavoidable that, still on a citrus 'high' from my recent Lemon Butter Bars success, I had the urge to revisit that happy citrus taste sensation again. It helped that I had 5 oranges sitting in the fridge, half a packet of cream to clear, leftover dark chocolate, and a whole lot of Orange Cointreau sitting around. I was struck with the sudden realisation that all these would culminate perfectly in an Orange Chiffon cake with dark chocolate glaze. When all the stuff you have lying around in your fridge and larder (and which you had been hoping to clear) happen to all fit into one dessert, it's almost as if all the stars have aligned in your favour. Of course it is essential that this process does not itself generate more leftovers which you will have to think up of another dessert to make use of. (That is a vicious cycle that I am too well aware of, which thankfully did not happen today.)

My first step, which I did the day before, was to make some candied orange slices for decorating the cake. Making candied orange is an amazingly simple process, requiring little skill but much patience for boiling, rinsing and re-boiling the orange slices several times to get rid of the bitterness of the orange skin, and to render the orange slices soft. Unfortunately I am somewhat lacking in the patience department, and did not reboil the slices as often as I should have, resulting in candied orange slices that were rather chewy. Apart from that, they turned out beautifully luminous and glassy - holding one was like holding a little piece of sunshine. 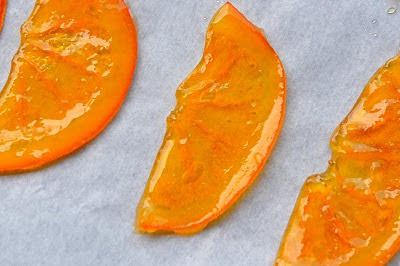 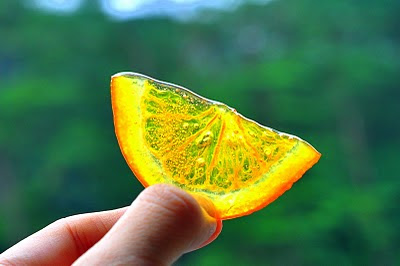 Next, I made the chiffon cake (recipe from Rose Levy Beranbaum) - adding in orange juice and orange zest in abundance. I couldn't decide whether adding in some orange chunks would give the cake nice, interesting orangey pulp parts, or render parts of it soggy instead. Since this was for an event, I decided to reserve my experiment with orange pulp for another time. The cake rose beautifully high, and was a lovely natural orange colour - I liked the fact that it tasted good on its own without even adding any orange extract!

I split the chiffon into 2 layers, and whipped up a simple fresh cream frosting with orange zest and orange Cointreau to go between the layers. Since orange and chocolate is such a well-loved pairing, I glazed the entire cake with a generous covering of Valrhona Alpaco 66% dark chocolate, flavoured again with orange cointreau and orange extract.

I had intended at first to lay the candied orange slices flat on the top of the cake, but somehow that resulted in them looking very dull against the dark chocolate background, which really didn't do justice to how amazing they looked on their own (as you can see). In the end, after a couple of experiments, I decided to stand them up in a fleur-de-lis type arrangement so as to show off the stained-glass luminousness of the candied oranges. 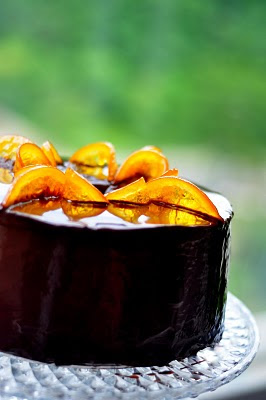 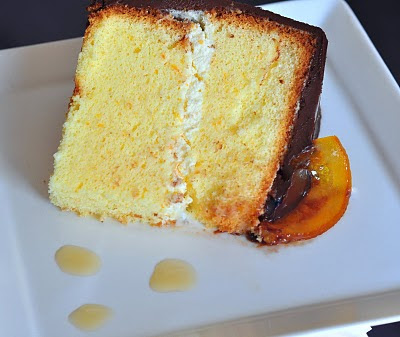 Posted by Sugahmommy at 8:21 PM 5 comments

Subscribe to A Spoonful of Sugah by Email
Labels: chiffon, dark chocolate, orange 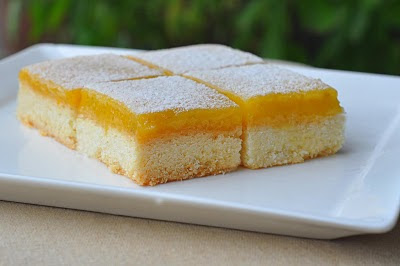 I've always been a fan of anything lemony. One of my favourite candies when I was young was Super Lemon - a yellow, round, hard candy that, the moment you pop into your mouth, hits you with its shocking first taste of intense lemon sourness, before giving way finally to a mellow lemon-flavoured sweetness. For a child who was not particularly into sweets, I consumed quite an unhealthy amount of Super Lemon, especially when my parents weren't looking (to the extent sometimes that my mouth was corroded by the acid .. but that's a gross topic for another day).

Anyway, the point of this is that "Super Lemon!" was my first thought when I first bit into these Ultimate Lemon Butter Bars, made from a recipe by Rose Levy Beranbaum. I'll have to say that this is one of the best recipes I have ever baked from - the instructions were precise and the proportions, perfect. The Lemon Bars had a deliciously smooth and lemon-tangy curd (which was soft to the bite but yet firm enough to be cut beautifully), and most importantly, a crisp shortbread base, avoiding the sogginess that tends to plague desserts of this sort. The bars stayed good and fresh for at least 2 days in the fridge, after which the base understandably got a little softer and definitely lost its 'snap', although as a testament to Rosy's skill and recipe it still never got quite so bad as to be completely soggy. This recipe is a keeper, and if you have a craving for lemons, you can try it here.

Posted by Sugahmommy at 8:02 PM 0 comments

Subscribe to A Spoonful of Sugah by Email
Labels: lemon bars 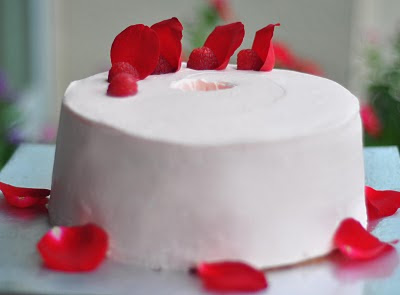 The Ispahan Cake is inspired by famous Parisian patissier Pierre Herme’s signature creation of the same name, the Ispahan Macaron, which features the exciting flavour combination of a rose-scented macaron with lychee and raspberry fillings. In rendering a cake version of the Ispahan flavours, I decided that the angel cake lent itself naturally to this transition. Like a macaron pastry, an angel cake is made predominantly from egg whites. The light airy texture of the angel cake also showcases the delicate flavours of rose and lychee well. For aesthetic effect, the cream frosting is tinted pink (even though it has no rose flavouring, only the cake does), as a nod to the pink Ispahan Macaron. Also, I love the clean white colour of the angel cake too much to add any colour to it! Everytime I bake this cake, I never manage to get a picture of a cut slice of cake in order to show how it looks inside, either because I am in a hurry to deliver it or we finish most of it before any decent photo-worthy slices are left. In any case, if you can employ your imagination a little, it is a 2-layered pristine white cake that is filled with soft pink frosting and raspberies. The contrast between the white and pink is just gorgeous and so girly. Which also explains why it is one of my Sugarbabe 1's top cake request.

The cake shown above was baked for a charity event called Hearts and Hands held at Seen at Dempsey in aid of autistic children (see seenatdempsey@blogspot.com). Hearts and Hands has a fantastic ongoing charity project where you can order delicious home-baked and totally chi-chi cakes from 2 fabulous home-bakers, and they will donate the entire proceeds to charity. If you are interested please email me for the order form.

Posted by Sugahmommy at 2:28 AM 2 comments 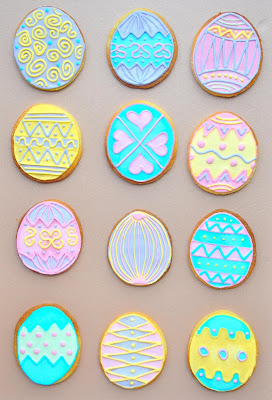 ******************************************************
This little project started because I had some new easter themed cookie cutters to use, and a tin of meringue powder to clear (most of my projects involve trying to use up baking supplies). And as is typical for me, I thought it was not going to be all that hard - completely underestimating the amount of work it would take to bake and nicely ice each cookie. The results were satisfying, but I would not be in a hurry to repeat this any time in the near future. I spent a good7 - 9 hours from start to finish baking and icing these little cookies!! 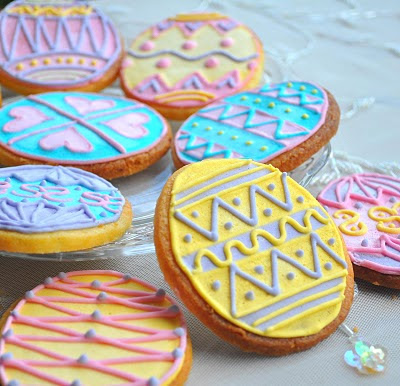 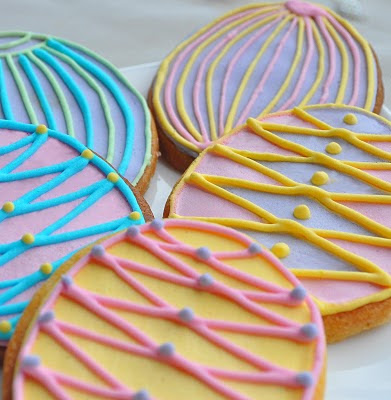