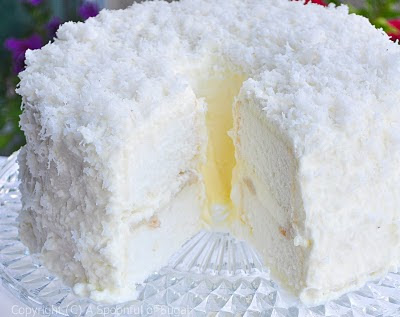 Naturally, the cake base for my ethereal vision had to be an angel cake. The angel cake is one of my favourite cakes for several reasons, not least of which is that it is completely FAT-FREE and naturally low in cholesterol (since there are no egg yolks). The fact that it is comprised predominantly of egg whites also means that it is a great source of body-building protein; which makes it possibly the only cake which might actually help you to build muscle. But perhaps the most beautiful thing about an angel cake is that, in sea of pedestrian yellow and brown cakes, it stands elegantly white.

Such a delicate cake must be paired carefully with similarly delicate flavours that will not overwhelm it. In the end, I chose the refreshing tropical flavours of white-fleshed lychees and coconut. 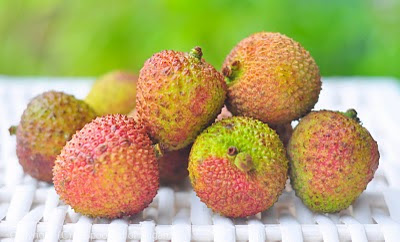 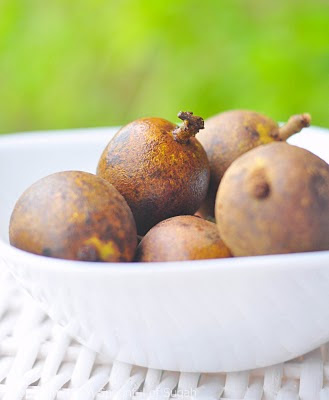 *********************************************
I had a wonderful baking day with this cake (which kind of made up for my recent harrowing experience with the Strawberry Shortcake). The angel cake baked up nice and tall. Once trimmed of its brown outer crust, it looked as if I had a big piece of cotton resting on my cooling rack! I split the cake into 2 layers, brushed them lightly with lychee syrup, and folded fresh lychees into a whipped lychee-almond cream that went between and over the layers. Lastly, a confetti-like coat of finely-shredded fresh coconut completed the look.

This cake is so light, each slice has to be cut gently with a serrated knife, as any other kind of knife will compress and ruin its delicate structure. On first bite you will first notice how light and airy-soft it is. Then comes the joy of munching on juicy pieces of firm-fleshed lychees enveloped in almond-scented cream, its aromatic sweetness perfectly complemented by the slightly salty and almost nutty flavour of the shredded coconut.

I've heard someone exclaim once that eating a piece of the Ispahan cake (also made from an angel cake base) was like eating air. Well if that is true, then a slice of this Lychee and Coconut Angel Cake would certainly feel like having a bit of a fluffy tropical cloud on your fork. 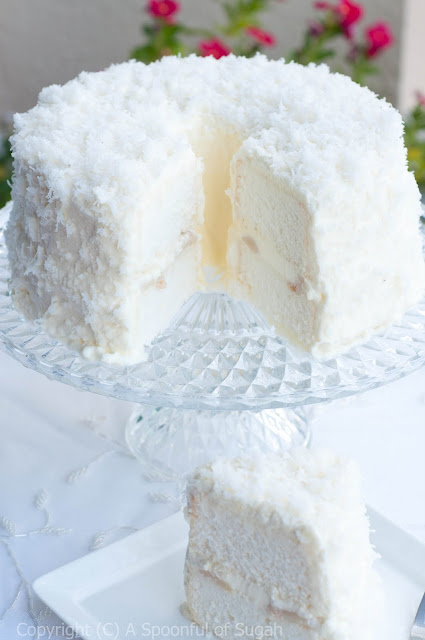 
Angel cake base:
1.5 cups egg white (about 12 large egg whites)
¾ cup less one tablespoon caster sugar
¾ cup caster sugar
1 cup sifted cake flour
1.5 tsp cream of tartar
¼ tsp salt
1 tsp vanilla extract
Preheat oven to 170C. Whisk together the ¾ cup less one tbsp caster sugar, together with cake flour, set aside.
Beat egg whites until frothy, then add cream of tartar and salt. Beat until fully incorporated then begin to add the remaining ¾ cup sugar, 1 tablespoon at a time. Beat to soft peaks, then once that happens, add vanilla extract and beat until the egg whites just forms stiff glossy peaks. Do not overbeat.
Sift the sugar and cake flour mixture lightly over the egg whites in 6-8 additions, and gently fold in after each addition. Take care not to fold too quickly or with too many strokes or the egg whites will deflate and the cake will not rise properly. Once the sugar and flour have been fully folded into the egg whites, transfer the batter gently into an ungreased 9-inch chiffon tube pan with removable bottom. Run a spatula through the batter to ensure that there are no large bubbles in the batter, then smoothen the top.
Bake for 50 – 60 minutes, until the top springs back lightly when pressed and a cake tester inserted in the cake comes out clean (or with only a very few dry crumbs adhering).
Remove from oven and invert pan over a bottle to cool completely.
Once cool, run a sharp knife around the sides and bottom of the pan to release the cake. Trim the cake completely of its brown crust so that it is completely white.
Lychee cream frosting:
2 ½ cups heavy whipping cream (must be cold)
¼ cup lychee puree (if unavailable, increase lychee extract to 1¼ tsp or to taste)
1 tsp lychee extract
½ tsp almond extract
5 tablespoons sifted icing sugar
Using the electric mixer (whisk attachment), beat cold whipping cream. Just when it gets soft and billowy, slowly and very gently add lychee puree in 3 to 4 additions, sugar and extracts then beat to stiff peaks.
Assembly:
1 cup fresh shredded coconut
1 cup of fresh lychees, pitted, drained and patted dry. (Reserve juices)
¼ cup of lychee syrup or if unavailable, simmer lychee juices with sugar to make a light syrup. Lychee liquer if available is also a good substitute.
Brush each angel cake layer lightly with lychee syrup, being careful not to brush on too much as it would make the cake soggy.
Fill the layers with whipped lychee cream and fresh lychees, and then frost the entire cake. with the whipped cream. Sprinkle dessicated coconut liberally over the top and sides of the cake.
Storage: Because of the use of fresh coconut, this cake should be served and eaten on the day it is made. Fresh coconut will quickly turn sour the next day. If desired, the fresh coconut may be substituted with dessicated coconut to allow for slightly longer storage (i.e. 3 days).
Posted by Sugahmommy at 9:47 AM

Subscribe to A Spoonful of Sugah by Email
Labels: Angel cake, coconut, lychee