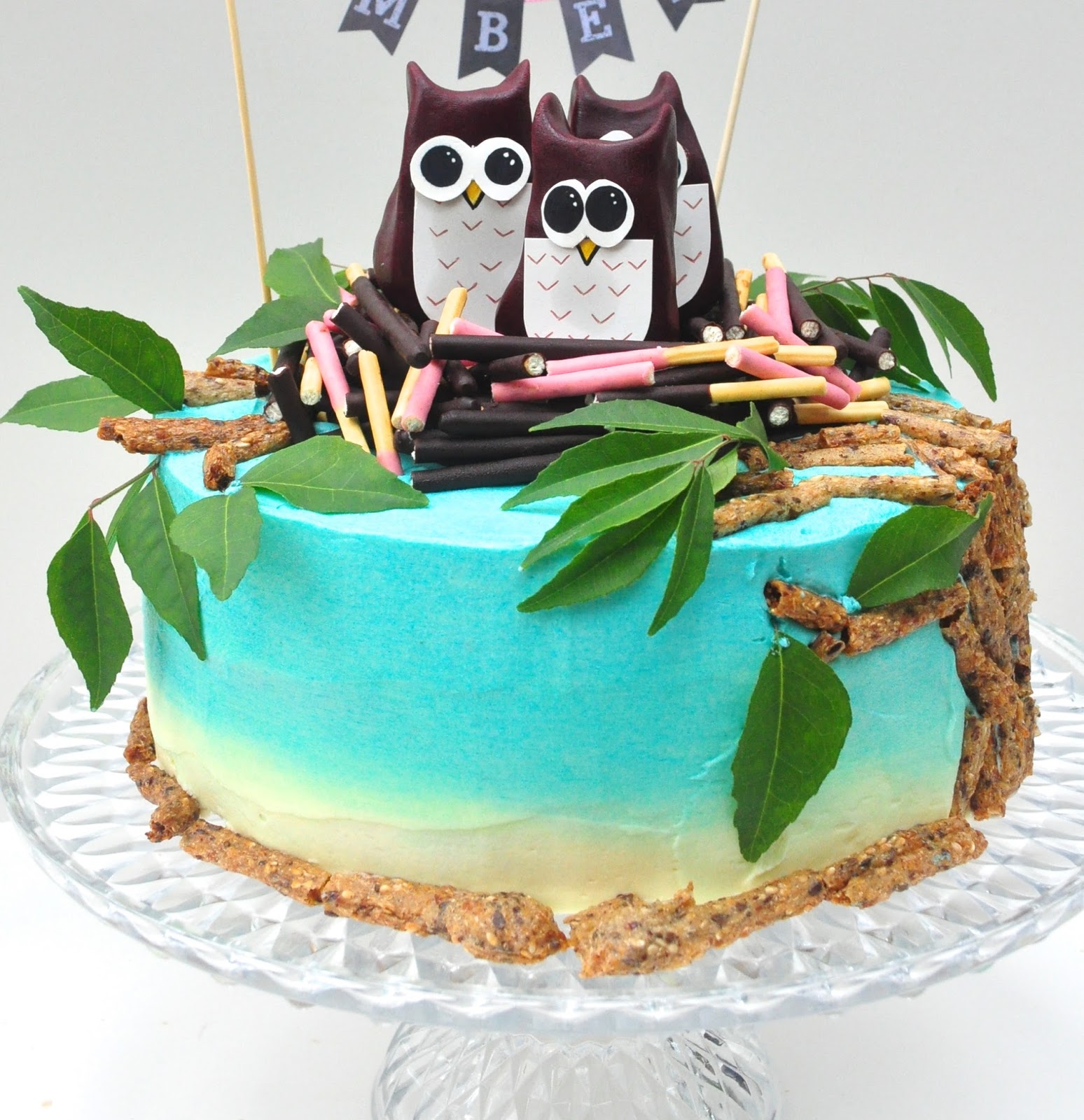 I had a hard time deciding which book to use as a theme for Sugababe3's 3rd birthday. She has many "favourite" books, and some of them are hard to translate to cake.

There was of course also the inevitable request for a Frozen cake, which I promptly denied as it was too common, and really, we've heard and seen enough of Frozen in our household of 3 little girls by now. A Frozen cake would a little too hard to stomach.

We finally settled on Martin Waddell's "Owl Babies". Have you read the story before? It's about 3 owlets - Sarah, Percy and Bill - who wake up one night in their hole in the tree, to find that their mother is gone. As they wait for their mother to return they grow increasingly anxious. The older two try to think about what their mother could be doing and when she would return. But the youngest baby owl is so sad that he just keeps saying "I want my Mummy" throughout the book.

It was such an apt choice of book for Sugababe3's birthday cake. For one, we have 3 girls in the house and she is the youngest (not to mention that she is also turning 3). She is also SUCH a Mummy's girl, constantly asking for me and saying "I want my Mummy".

For me it is so important when making a birthday cake, to be able to somehow identify and connect with the theme. It gives me the enthusiasm and passion to see through the many steps of making, designing and assembling the birthday cake.


Normally, chocolate is my default choice for a birthday cake, simply because it is such a crowd-pleaser. However, Sugababe3 is not a fan of chocolate (I know, it's crazy right?).

She asked for an orange cake (she adores oranges), and while I would normally prefer to make a chiffon cake (as I prefer it's light texture) I decided that the cake might need to be a little more dense and sturdy to hold up the owl babies and their nest. 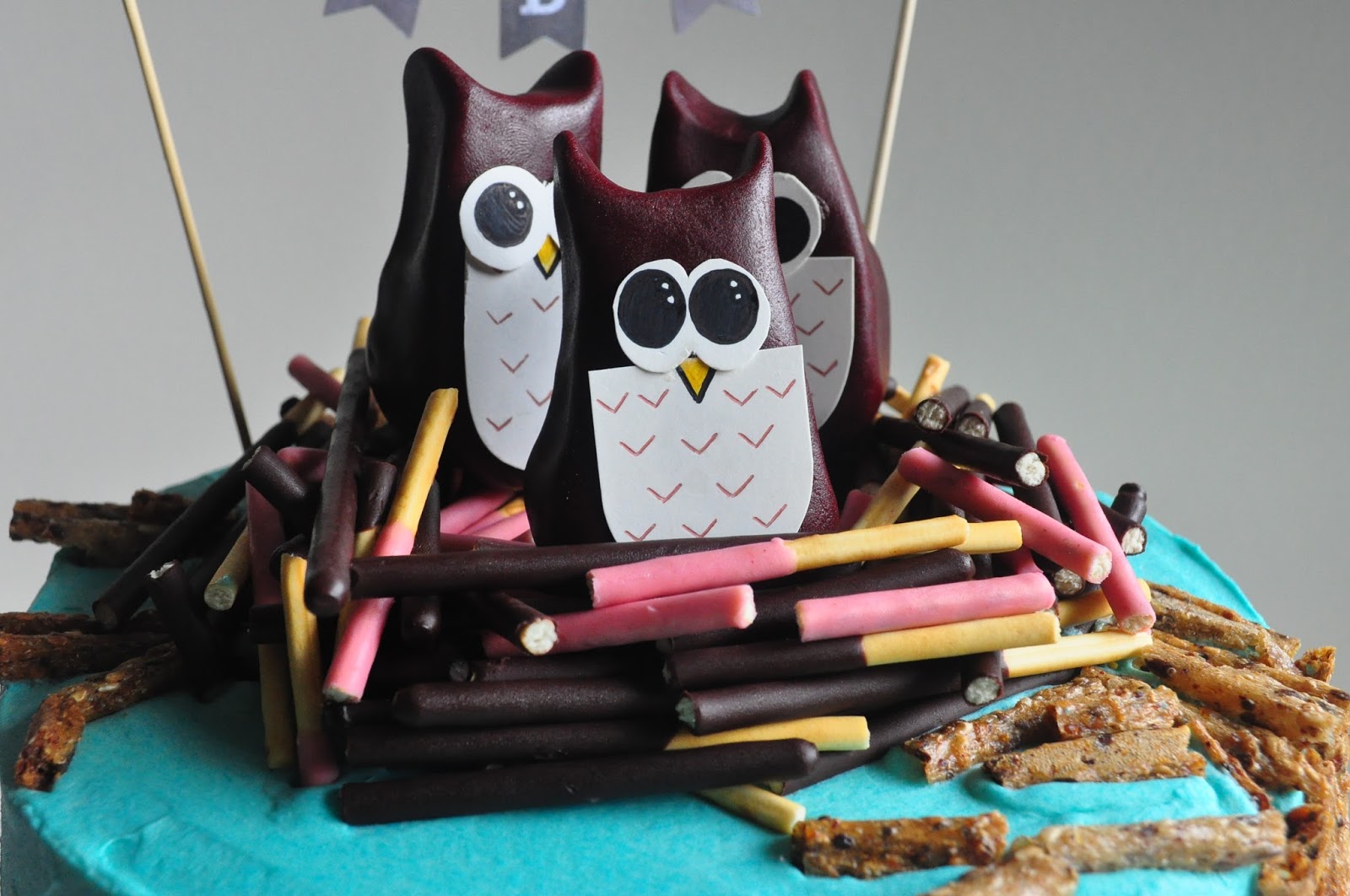 In the end I tried Sweetapolita's Orange Party Cake.  It had a really interesting mixing technique I hadn't seen before for cake batter - that of mixing softened butter into the dry ingredients until the resulting texture resembled coarse breadcrumbs. (The only instance I know of a breadcrumb-like texture being needed when baking is when making pie crust).

The cake base is quite average - fragrant, and in terms of its texture it resembled a yellow cake and is sturdy enough for a party cake but not particularly moist or tender.  I found it necessary to moisten each cake layer with Orange Cointreau syrup. The orange whipped cream filling however is delicious, although I regret I cannot say the same for the buttercream frosting which was unbearably sweet. I regretted not going with a lighter swiss meringue frosting as we ended up scraping off most of the buttercream when we were eating the cake.

Decorating the cake, as always, was the fun part. I was very blessed to have a lot of help from the husband this time. We used Pocky sticks for the owl nest, and these awesome organic crackers from iHerb* for the tree trunk. The pretzel sticks are so wonderfully gnarled and textured that they really look like branches!  The most challenging part was probably making the fondant owls, a task made more challenging by our discovery the night before her birthday that I had mistakenly bought a packet of RED (instead of white) rolled fondant. The original plan was to make grey owls (like the owls in the book) but given that it was too late to go out and buy white fondant (or to make a batch), we made do and turned the owls dark brown instead. Of course that meant that we had NO white fondant with which to add other details to the owls (eyes, beak etc), so the hubs drew these on cardboard and we simply affixed them onto the fondant owls. In the end I think the owls turned out cuter than if we had cut out its features with fondant.

It's no secret that I am not a fan of fondant, and when I can find an alternative way to decorate the cake other than by using fondant I am sure to use it. And so, when deciding what to use for the leaves on the tree, I chose some edible leaves from my garden instead of fondant leaves (which I assume would be the natural choice for many). It might amuse you to know that I used curry leaves. Fortunately it did not alter the taste of the cake in any way and functioned merely as food-grade decoration.

The last touch was a chalkboard bunting made with the free printable from Yellow Bliss Road.

Was Owl Baby pleased with the result? You can bet she was.

Posted by Sugahmommy at 8:28 PM