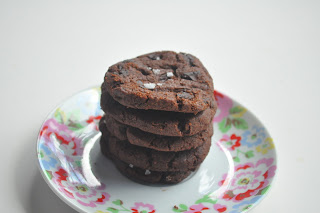 It all started when Sugababe 2 read her Richard Scarry book. There was a picture of some small cute animal (I forget which one, the book's full of them) munching on a plate of chocolate cookies. Somehow the moral lesson of the story was eclipsed by that tantalising illustration of tiny chocolate chip cookies, because after that, she kept begging me to make her some. I know how it feels to have a craving, and more so, how important it is to satisfy one, especially when chocolate is involved. So, busy as I was, I immediately set about to make her the best chocolate cookies in the world. Of course, the fact that by that time I was experiencing the onset of the same craving may also explain why I went straight to the kitchen instead of saying "Shoo!".

Thankfully, I DO know the recipe for the best chocolate cookies ever. Seriously. You don't have to look elsewhere. Nothing beats this for an intense hit of chocolate. It's ridiculously good for very little effort. Just use really good dark chocolate, like Valrhona or Callebaut, and enjoy with a tall glass of cold milk. And because I love that salted chocolate thing going on there, I sometimes sprinkle some extra flaked Maldon sea salt on top before popping it into my mouth. Heaven. Bless Richard Scarry and his cute animals.

Excerpted from Baking: From My Home to Yours by Dorie Greenspan (Houghton Mifflin, 2006).

"I once said I thought these cookies, the brainchild of the Parisian pastry chef Pierre Hermé, were as important a culinary breakthrough as Toll House cookies, and I've never thought better of the statement. These butter-rich, sandy-textured slice-and-bake cookies are members of the sablé family. But, unlike classic sablés, they are midnight dark — there's cocoa in the dough — and packed with chunks of hand-chopped bittersweet chocolate. Perhaps most memorably, they're salty. Not just a little salty, but remarkably and sensationally salty. It's the salt — Pierre uses fleur de sel, a moist, off-white sea salt — that surprises, delights and makes the chocolate flavors in the cookies seem preternaturally profound.
When I included these in Paris Sweets, they were called Korova Cookies and they instantly won fans, among them my neighbor Richard Gold, who gave them their new name. Richard is convinced that a daily dose of Pierre's cookies is all that is needed to ensure planetary peace and happiness."

1. Sift the flour, cocoa and baking soda together.

2. Working with a stand mixer, preferably fitted with a paddle attachment, or with a hand mixer in a large bowl, beat the butter on medium speed until soft and creamy. Add both sugars, the salt and vanilla extract and beat for 2 minutes more.

3. Turn off the mixer. Pour in the dry ingredients, drape a kitchen towel over the stand mixer to protect yourself and your kitchen from flying flour and pulse the mixer at low speed about 5 times, a second or two each time. Take a peek — if there is still a lot of flour on the surface of the dough, pulse a couple of times more; if not, remove the towel. Continuing at low speed, mix for about 30 seconds more, just until the flour disappears into the dough — for the best texture, work the dough as little as possible once the flour is added, and don't be concerned if the dough looks a little crumbly. Toss in the chocolate pieces and mix only to incorporate.

4. Turn the dough out onto a work surface, gather it together and divide it in half. Working with one half at a time, shape the dough into logs that are 1 1/2 inches in diameter. Wrap the logs in plastic wrap and refrigerate them for at least 3 hours. (The dough can be refrigerated for up to 3 days or frozen for up to 2 months. If you've frozen the dough, you needn't defrost it before baking — just slice the logs into cookies and bake the cookies 1 minute longer.)

5. Center a rack in the oven and preheat the oven to 160C. Line two baking sheets with parchment or silicone mats.

6. Using a sharp thin knife, slice the logs into rounds that are 1/2 inch thick. (The rounds are likely to crack as you're cutting them — don't be concerned, just squeeze the bits back onto each cookie.) Arrange the rounds on the baking sheets, leaving about 1 inch between them.

7. Bake the cookies one sheet at a time for 12 minutes — they won't look done, nor will they be firm, but that's just the way they should be. Transfer the baking sheet to a cooling rack and let the cookies rest until they are only just warm, at which point you can serve them or let them reach room temperature.

Posted by Sugahmommy at 6:20 AM